The Salone Internazionale del Mobile is the global benchmark event for the furnishing and design sector.

The Salone Internazionale del Mobile was launched in Milan back in 1961 as a vehicle for promoting Italian exports of furnishing and accessories.

Now in the 58th edition of the Salone del Mobile. Milano ended with very good results, both in terms of visitor numbers and in terms of the quality of trade relations, testament to the power of attraction and inclusiveness of the fair. The 386,236 attendees, over the 6 days, from 181 different countries made for a 12% increase over the 2017 edition, which also featured Euroluce and Workplace3.0.

2,418 exhibitors, 34% of them from 43 different foreign countries, were split between the Salone Internazionale del Mobile, the International Furnishing Accessories Exhibition, Euroluce, Workplace3.0 and S.Project, including the 550 designers under 35 who took part in SaloneSatellite.

The Salone is not and had never been, just synonymous with the business but also with culture. The proof is the number of collateral events that take place every year alongside it, invariably curated by leading international artists and designers. So, the Salone for all these years appears as a dominant international platform in the domain of the design and art.

What is the secret of success?

For the first time form its establishment, Salone issued in 2018 Manifesto as a declaration of intent, with the base for a way of thinking, working and designing. I would say that in this document there are no changes in the Salone strategy. But in Manifesto it was clearly emphasized the strong connection between Milan and Salone Del Mobile. They work together into preserving the leadership role of both the trade fair and the city, putting up a common front within the global market to attract ideas, projects and resources.

The document rests on nine keywords: emotion, business, quality, design, system, young people, communication, culture and Milan, underscoring the fact that the success of the Salone del Mobile. Milano resides in the tireless industrial network that underpins it, in the quality of designs that entail sustainability, excellence of form and content, the ability to work as a system and to train young people and, especially, to capitalise on the extraordinary integrated communication and cultural mechanism that has always characterized the city and its region.

A global success achieved by the Salone was recognized by many governments and other institutions (Italian Trade Agency ICE, Confindustria…) which provide support to this event as one of the drivers of the Italian economy. Salone del Mobile build a fruitful relationship between business, city and region and upgrade it each year.

Having in mind success and development, I would say that in the next future Salone del Mobile and Milan will involve not an only region but a wider area or whole of Italy.

No borders for business

New designs by Antonio Citterio, Piero Lissoni, Vincent Van Duysen and Michael Anastassiades were presented in an exhibition space that aims to highlight the technological vocation and the design research of a brand that since 1966 has been a design leader.

The news is also that B&B Italia was presented together with Flos and Louis Poulsen as Design Holding with an impressive 4000 square meters stand located inside the new S.Project pavilion, designed by Calvi Brambilla.

Prior to forming part of the new Design Holding group, private equity firm Investindustrial bought of Flos in 2014 and acquired a majority stake in B&B Italia the following year. It then acquired Louis Poulsen in July last year. Meanwhile, B&B Italia bought kitchen brand Arclinea in 2016.

The collections of all three brands originated through long-lasting partnerships with legendary designers, created the history of industrial design. The brands will remain separate, but it is expected that together, sharing the same strategy they will have new strength on the market.

Design Holding formation is the latest move in the ongoing consolidation of furniture and lighting brands into large conglomerations. It was announced the Group intent is further grow globally through acquisitions of other complementary design brands as well.

Mirror of the furniture sector

We were the witness of other changes in the furniture sector and rising of global conglomerates. It is the ability of the companies to understand the conditions on the market and what will be successful globally.

Initially, the Italian furniture sector started, family-owned business and at the time used to be extremely successful. But today on the market the fact that the company is a family business, in some cases can become a weak point.

While these companies possess advantages like flexibility, a narrow specialization and ability to define the style in a way that is appreciated worldwide. On the other hand, it is difficult to keep stable their competitive strategy for various reasons: the model of production organization, production capacities, technologically-advanced, weakness in high-tech, financial sources.

Today the global market has other requirements and demand for much larger, more structured companies.

This year Italian kitchen and bathroom company Boffi Group has bought 50% shares in ADL, an Italian manufacturer of dividers and sliding doors. Previously In 2015, Boffi acquired furniture design company De Padova. In 2017 De Padova also entered into a partnership with Danish start-up MA/U Studio. MA/U Studio (shelf systems and furniture for the home and office). This year ADL participates for the first time in the Salone del Mobile at the Boffi /De Padova booth, located in the new S. Project space. These companies merge following the acquisition. However, it was announced that they will maintain their own different identities, united by the same shared aim of creating a platform of excellence for the design industry.

Moroso is an example of how a small Italian artisan-owner company has evolved since it was run until the nineties by Agostino Moroso.

Moroso and the iconic lighting brand Ingo Maurer. They begin an aesthetic synergy and commercial partnership. At the Salone del Mobile, two companies were presented on the Moroso stand designed by Patricia Urquiola and at Fuorisalone.

The commercial partnership between the two brands will see the display and sale of their respective products in the Moroso showroom in Milan and Maurer showroom at 47 Kaiserstrasse, Munich.

The two companies will be jointly presenting their products to the Italian contract market, proposing interiors’ solutions featuring Moroso furniture and Ingo Maurer lamps, along with custom-made solutions.

The reasons for cush consolidations on the furniture market are different: sometimes it is know-how, range of the offer, project of growth, distribution network and visibility on the market. But always exist the main reason which is mutual growth and new global challenges together.

It seems that this year is a year of anniversaries. Companies which represent design joint celebrate remarkable anniversaries of their existence and business success. Only some of them are:

Famous furniture company Kartell founded by Giulio Castelli all the way back in 1949 celebrated its 70th anniversary at Salone del Mobile 2019 with a variety of activities in the city or on the fairground.

B&B Italia celebrated the 50th anniversary of the legendary UP Series by Gaetano Pesce.

The stand at Salone del Mobile, designed by Calvi Brambilla, featured a celebration of the iconic UP Series by Gaetano Pesce, while their store in Via Durini hosted a special installation to celebrate the same anniversary.

Flos launched the re-edition of one of its cult designs from the Sixties, the lamp Chiara by Mario Bellini, on the occasion of its 50th anniversary, and will also release the first edition of an extraordinary 1957 design by Achille and Pier Giacomo Castiglioni, the Bulbo lamp.

At Fuorisalone, in the showroom in Via Pontaccio, which featured an installation curated by Marco Viola to mark the 10th anniversary of the M’Afrique collection.

All companies with extraordinary design histories demonstrated that their collections and cult pieces designed by design masters are actual at any time. But they also confirm that always watching forward and explore new possibilities to launched new products that will become the new design icons specific.

The furniture industry is specific as it combines new technologies with innovation, heritage, design and style.

Among the competitive factors determining the success of furniture, the design is in the first place. This is an important success factor for the furniture related sectors (furniture components, woodworking machinery, household appliances) and is fundamental for the image of Italian furniture. Speaking about design means that serve to boost the value of design objects through working closely with designers, artisans, and communication and cultural professionals to keep on producing product and process innovations system and take things much further than just business, offering global experience, in which ideas are a most important factor.

One of the essential parts of The Salone del Mobile strategy is an investment in young people design. The Salone del Mobile has been nurturing promising young designers for more than twenty years at SaloneSatellite. The event is a springboard for talented young people from across the globe, along with their own creations, prototypes of objects that could prove to be their passport into the world of design. Many of them have been successful, finding the right companies to manufacture their creative designs; equally, these young creatives’ ideas often provide the lifeblood companies need for reworking the design of their own products. It is at the Salone del Mobile that demand and supply meet, with a view to commercial, creative and cultural interchange. These young people come from all over Italy and all over the world because Milan is a learning platform for creating knowledge that is then exported. When they return to their countries of origin or are scattered about the world, they take with them the cultural bases, the methods and the styles they have learned in Milan. Milan is a way of being, hardworking, concrete, sincere and dynamic.

Successful strategy contributes that The Salone del Mobile is a unique event of its kind, with the power to draw in professionals and the general public with what is now a trade fair in the round, with deeply rooted ties to Milan and its institutions while also being a significant international presence. This event achieved global success and was recognized as a crucial factor in the development of Made in Italy around the world with a clear role as a global trendsetter. Italian strategy and design were a symbol of the success of the trade fair and the whole the national economy.

The role of design in the Italian furniture and furnishings industry and the impact of design on company branding is a good example for any business intending to base company policy on investment in design. 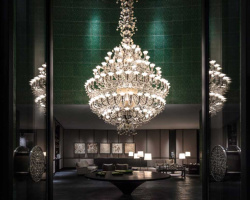